These days, Bentley is mostly interested in selling Christmas gifts – such as its latest perfume – rather than trying and fight off the incessantly expanding horde of ultra-luxury super-SUV foes.

Back in 2015, the exotic British automaker was shocking the world by presenting its first crossover. And they inadvertently sparked the ultra-luxury super-SUV craziness that ensued. Now, they face increasing threats from models like the Aston Martin DBX707, Lambo Urus, Rolls-Royce Cullinan, as well as the new 715-hp Ferrari Purosangue and 738-hp BMW XM Label Red kids on the block.

And what do they do, after faintly trying to simulate a fight or flight response in the guise of the Bentayga EWB and Speed versions? They now care about ‘Momentum Unbreakable’ perfumes in unique bottles. Well, speaking of bespoke, all we can say is the aftermarket realm is doing a better job of trying to mitigate the current Lambo Urus and Rolls-Royce Cullinan Black Badge kings of the mega-posh SUV niche.

And there is no need to take our word for granted as we have a nice little example that’s lighter than a summer’s blue sky. The custom-forged wheel experts over at Santa Fe Springs, California-based AG Luxury are the ones who have uncovered this light (blue) and inviting British ultra-luxury SUV treat. As such, it should be no wonder this Bentley Bentayga (it’s the V8-equipped S version, as far as we can tell) dwells lowered on a set of sizeable AG Luxury AGL77 Monoblock Forged aftermarket wheels dressed in classic chrome attire to provide a lighthearted contrast.

Unfortunately, the aftermarket outlet neither lets us know anything regarding the exact dimensions of these ritzy wheels nor provides a glimpse of the interior goodies. Hopefully, the cockpit got treated with the same attention to detail as the exterior – note that all black plastic elements are now dressed up in the same shade as the rest of the body.

And if that’s not your cup of blue tea, they also have the spotlight on a Rolls-Royce Phantom shod in AGL45 Monoblock Forged chrome wheels, by the way.. 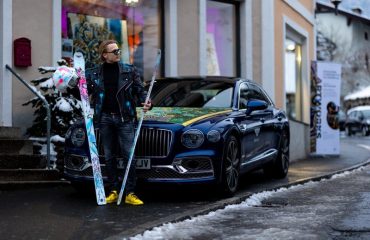 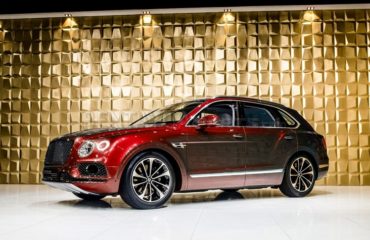